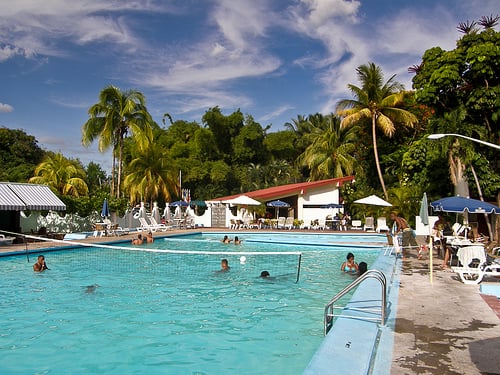 El San Juan Hotel is located on the hill of the same name in the July 1, 1898 , was held in this former defense chief in Santiago de Cuba , the battle in which American troops engaged under the orders of Lt. . Colonel Roosevelt and seasoned Mambises led by General Calixto García Iñiguez , at odds melee forcing the Spaniards to retreat towards Santiago. Only 7 minutes drive from the historic center, the hotel operates a sales and service category three ( 3) stars . Suitable for cultural tourism city , its rooms, all with windows, terraces or balconies overlooking the pool or gardens. The Hotel is located within the Military - Historical " San Juan Hill " Park , scene of the famous northern Spanish-Cuban- American War.
The hotel has 110 air conditioned rooms with private bathroom, satellite TV , safe , telephone . Other : 3 restaurants , lobby bar, party room , swimming pool , snack bar, children's pool , shop , internet, nursing , multipurpose room , currency exchange , travel desk and parking

This hotel has no reviews. Would you like to add your own review?